For the Love of Ryder, Part 1

Ryder is our rescued Deer Chihuahua.

I have never witnessed love at first sight between a human and animal before we met Ryder, and I don't know if I will ever have the blessing to witness such a perfect and immediate bond again, but I am thankful that I was present and paying attention when it happened this time.

We have a small dog named Prince who joined our family as a 10-week-old puppy in 2012. He will be 5 years old in May of this year. We were happy with him as our sole dog, and were not looking for a new member of the family. Nature Girl, however, wanted to explore short-term fostering of other animals and volunteering at our local animal shelter. She was too young to volunteer at the shelter, and we hadn't found the time to foster, but we did visit the shelter often and she took time to visit with the dogs and cats and give them attention.   She never complained when it was time to leave. 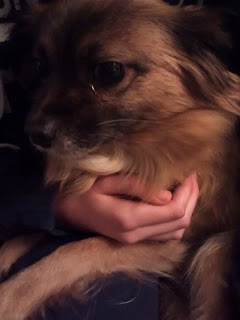 On Mother's Day weekend in 2015, we were at PetSmart with Prince. Nature Girl went to take a look at the pets up for adoption, just to browse, NOT TO ADOPT! (I was adamant that we were NOT looking for an animal to adopt, so she should not get attached enough to ask.) We make our plans, and sometimes the Heavenly Father has other plans. She went to look at this particular Chihuahua who seemed to be very interested in her and also seemed very calm and friendly. Their eyes met, she gave him a pet, and sat next to the portable pen to pet him some more. He was SOOOOO SOFT and so polite. She was mesmerized, and he was ignoring all other people but her. I called her away, and told her that it was nice that she had given him some attention.

As she walked away from him, he howled for her to come back, all the while still ignoring others. There was another little girl trying to pet him, and he turned his back to her and gazed our direction. Nature Girl got a pleading look in her eyes, but I stood firm. WE DON'T NEED ANOTHER DOG. As the uncharacteristic tears welled up in her eyes and the little sweet dog howled for her, we resolutely left the building. She cried. She did not beg, as she is a polite and respectful sort, but she softly cried. I was wavering and marveling at the sight I had just witnessed. This dog actually howled for her! She is in tears (and she has never ever cried at having to leave the animals at the shelter before, despite frequent visits).

When we arrived back at PetSmart to pick up Prince a few hours later, this sweet little Chihuahua was still there. Adoption time was ending, and he had not been chosen. He howled to Nature Girl when he saw her walk into the building. She ran to him with tears in her eyes. I caved. I asked the woman if we could foster him for a week, just to see if he would be a good fit with our family, and if Prince would accept him. The woman was elated, and said we could take him for the week. So, we left there with Prince, and our new friend, Ryder, in tow.

Now, how to tell Mr. Nature? He had been adamant that he also did not think we needed another dog. We worried that he would be upset because he had not been consulted or included in the decision. I reasoned that we had not made a permanent decision, and that he could stamp the idea with his ultimate veto if he chose. Mr. Nature was very understanding, but he did not say that we could make this dog a permanent member of the family (yet). He agreed that we could keep Ryder for a week and see how things went.